Borderline useless, more trouble than its worth, but cool nonetheless. 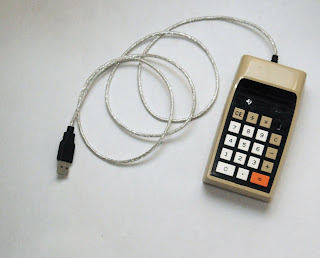 Make cool things look as nerdy and boring as possible!

One of the first things I thought of doing with an arduino was turning an old calculator into a MIDI controller. The buttons are simple momentary switches.. no velocity sensitivity, but its nice for a pretty compact set of buttons.. and it looks neat. stfu.

Eight of the buttons are connected to the arduino digital inputs through a 4021 shift register as explained here. The rest make their way directly to the remaining digital ins. 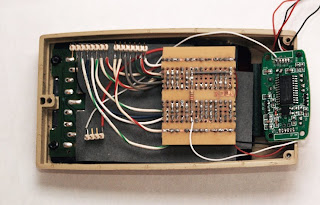 Button matrixeses are generally pretty similar. Each button can be checked by a unique pair of contacts on the terminal or ribbon cable or whatever is connecting to the board. The trick is finding out which ones go where. All it takes is a little patience and a volt meter with a continuity tester.

Here's a tutorial I just found showing how to interface with a keypad. You're welcome.

The arduino patch checks the state of the buttons and generates the MIDI signals which are sent to a butchered $6 MIDI to USB converter cable/board/thing. 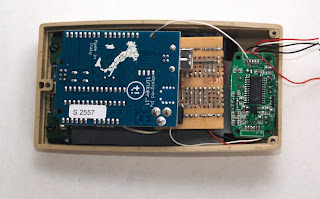 The midi-usb converter is the green board at the far right.
Midi from the arduino's serial out goes into the bottom, usb comes out of the top.
It also powers the arduino.

I mainly use it to trigger cue points in Torq Serato, but it works just as well for triggering clips or controlling a drum rack (minus velocity sensitivity, of course) in Live.

This is actually the second calculator I've tried. The first one is a mess and lacked the tricky USB support. I'll find some time to redo it and document it from the start, in case someone else would like to do something similar.
Posted by Nathaniel Shiftmore at 10:28 PM